Thursday - 10/10/2019 10:10
Some of the advantages like low cost, rugged design less complexity and easy to maintain of AC motors results many of the industrial operations are performed with use of AC drives than DC drives.
AC induction motor is a special type of electric motor having its own typical characteristics and performance in terms of starting, speed control, protections, and so on.
The performance over a wide range of applications makes three-phase induction motors accountable for 85 percent of the installed capacity of the industrial driving systems. Let us discuss on basic information about this motor and its special controlling technique of SVPWM.
Three Phase AC Induction Motor
The three-phase AC induction motor is a rotating electric machine that is designed to operate on three phase supply. This 3 phase motor is also called as an asynchronous motor. This AC motors are of two types: squirrel and slip-ring type induction motors. The principle of operation of this motor is based on the production of rotating magnetic field.
3 Phase Induction Motor Construction
These three phase motors consist of a stator and a rotor and between which no electrical connection exists. These stator and rotors are constructed with the use of high-magnetic core materials in order to reduce hysteresis and eddy current losses.

Stator frame can be constructed using cast iron, aluminum or rolled steel. Stator frame provides necessary mechanical protection and support for stator laminated core, windings and other arrangements for ventilation.
Stator is wounded with three-phase windings which are overlapped with one another at 120 degree phase shift fitted into slotted laminations. The six ends of the three windings are brought out and connected to the terminal box so that these windings are excited by three-phase main supply.
These windings are of copper wire insulated with varnish fitted into insulated slotted laminations. At all working temperatures, this impregnated varnish remains rigid. These windings have high-insulation resistance and high resistance to saline atmosphere, moisture, alkaline fumes, oil and grease, etc. Whichever suits the voltage level, these windings are connected in either star or delta connections.
The rotor of three phase AC induction motor is different for the slip-ring and squirrel-cage induction motors. Rotor in slip-ring type consists of heavy aluminum or copper bars shorted on both ends of the cylindrical rotor.
The shaft of the induction motor is supported on two bearings at each ends to ensure free rotating within the stator and to reduce the friction. It consists of stack of steel laminations evenly spaced slots that are punched around of its circumference into which un-insulated heavy aluminum or copper bars are placed.
A slip-ring-type rotor consists of three-phase windings are internally starred at one end, and the other ends are brought outside and connected to the slip rings mounted on the rotor shaft. And for developing a high-starting torque these windings are connected to rheostat with the help of carbon brushes.
This external resistors or rheostat is used at the starting period only. Once the motor attains the normal speed, the brushes are short circuited, and the wound rotor works as squirrel cage rotor.
Principle of Operation of 3-Phase Induction Motor

When the motor is excited with three-phase supply,three-phase stator winding produce a rotating magnetic field with 120 displacements at constant magnitude which rotates at synchronous speed. This changing magnetic field cuts the rotor conductors and induces a current in them according to the principle of Faraday’s laws of electromagnetic induction. As these rotor conductors are shorted, the current starts to flow through these conductors.

As we discussed above, the relative speed between the stator field and the rotor conductors causes to rotate the rotor in a particular direction. Hence, for producing the rotation, the rotor speed Nr must always be less than the stator field speed Ns, and the difference between these two parameters depends on the load on the motor.

Most commonly for controlling the induction motors, PWM inverter based drives are used.  As compared with fixed frequency drives, these PWM dives controls the both magnitude of voltage and frequency of the current as well as voltage applied to induction motor. By changing the PWM signals applied to the power switch gates, the amount of power delivered by these drives is also varied so that the three phase induction motor speed control is achieved.

A number of Pulse width modulation (PWM) schemes are used for controlling three phase motor drives. But most widely Sine PWM (SPWM) and space vector PWM (SVPWM) are used. As compared with SPWM, SVPWM control gives higher level of fundamental voltage and reduced harmonic content. Here we have given a practical implementation of this SVPWM control using 8051 microcontroller.

In the below circuit, three-level voltage inverter is used for obtaining three output voltages depends on DC bus voltage. Single phase supply is rectified to supply DC power to both microcontroller circuit and inverter circuits.8051 Microcontroller is programmed to produce SVPWM signals which are given to gate driver IC. 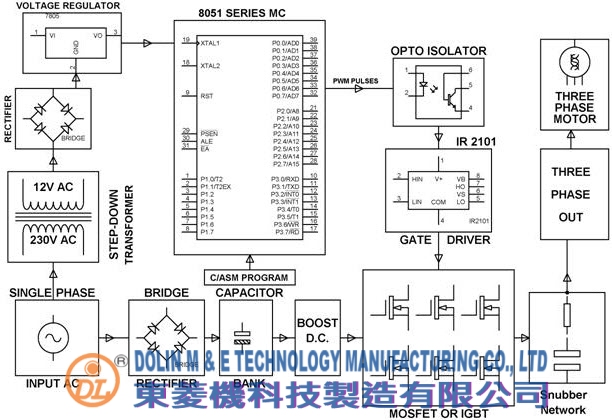 The inverter circuit comprises of six MOSFETs to produce variable three phase supply, for each phase two MOSFETs are deployed. These MOSFETs gates are connected to gate driver IC. Upon receiving the PWM signals from microcontroller gate driver switches the MOSFETs so that the variable AC output voltage is produced. Therefore, this variable AC with change in voltage and frequency varies speed of the motor.

This is basic information on AC induction motor with construction and working principle. In addition to this, SVPWM technique of controlling speed of the motor has many advantages than other PWM techniques as we seen above. If you have doubts on programming microcontroller for implementing SVPWM technique in it, you can contact us by commenting below.