Sunday - 21/10/2018 21:54
When selecting a DC motor for an application, or when developing a powered prototype there are numerous calculations and formulas which must be considered to produce a well-functioning, sufficiently-powered, and safe device.
Below we have provided some important formulas and calculation details to determine mechanical power requirements of a DC motor, to calculate torque, and for determining the steady state temperature increase of a motor. 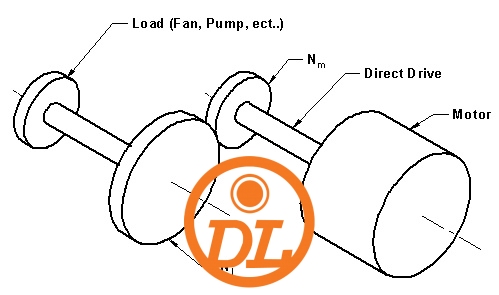 In DC motors, electrical power (Pel) is converted to mechanical power (Pmech). In addition to frictional losses, there are power losses in Joules/sec (Iron losses in coreless DC motors are negligible).

The most commonly used unit for angular velocity is rev/min (RPM). In calculating rotational power, it is necessary to convert the velocity to units of rad/sec. This is accomplished by simply multiplying the velocity in RPM by the constant (2 x ∏) /60:

It is important to consider the units involved when making the power calculation. A reference that provides conversion tables is very helpful for this purpose. Such a reference is used to convert the torque-speed product to units of power (Watts). Conversion factors for commonly used torque and speed units are given in the following table. These factors include the conversion from RPM to rad/sec where applicable.

For example, assume that it is necessary to determine the power required to drive a torque load of 3 oz-in at a speed of 500 RPM. The product of the torque, speed, and the appropriate conversion factor from the table is:

Calculation of power requirements is often used as a preliminary step in motor or gearmotor selection. If the mechanical power required for a given application is known, then the maximum or continuous power ratings for various motors can be examined to determine which motors are possible candidates for use in the application.

Assume that we have a small motor that we know has a nominal voltage of 9 volts. With a few fundamental pieces of laboratory equipment, the torque - speed curves for the motor can be generated:

Using a voltage supply set to 9 volts, run the motor unloaded and measure the rotational speed using a non-contacting tachometer (strobe, for instance). Measure the motor current under this no-load condition. A current probe is ideal for this measurement since it does not add resistance in series with the operating motor. Using an adjustable torque load such as a small particle brake coupled to the motor shaft, increase the torque load to the motor just to the point where stall occurs.

Now we have measured the:

Step 2: Plot Current Vs. Torque And Speed Vs. Torque:

The slope of this line is the proportionality constant for the relationship between motor current and motor torque (in units of current per unit torque). The reciprocal of this slope is the torque constant of the motor (in units of torque per unit current). For the resulting curves see Graph 1.

For the purpose of this discussion, it will be assumed that the motor has no internal friction. In practice, the motor friction torque is determined using the torque constant of the motor and the measured no-load current. The torque vs speed line and the torque vs current line are then started not at the left vertical axis but at an offset on the horizontal axis equal to the calculated friction torque.

Step 3: Plot Power Vs. Torque And Efficiency Vs. Torque:

Construct a table of the motor mechanical power at various points from no-load to stall torque. Since mechanical power output is simply the product of torque and speed with a correction factor for units (see section on calculating mechanical power requirements), power can be calculated using the previously plotted line for speed vs. torque.

For an ironless core DC motor of relatively small size, the relationships that govern the behavior of the motor in various circumstances can be derived from physical laws and characteristics of the motors themselves. Kirchoff's voltage rule states, "The sum of the potential increases in a circuit loop must equal the sum of the potential decreases.

" When applied to a DC motor connected in series with a DC power source, Kirchoff's voltage rule can be expressed as "The nominal supply voltage from the power source must be equal in magnitude to the sum of the voltage drop across the resistance of the armature windings and the back EMF generated by the motor.". 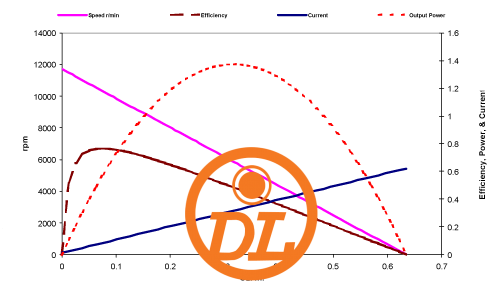 The motor constant is a function of the coil design and the strength and direction of the flux lines in the air gap. Although it can be shown that the three motor constants normally specified (back EMF constant, torque constant, and velocity constant) are equal if the proper units are used, calculation is facilitated by the specification of three constants in the commonly accepted units.

The torque produced by the rotor is directly proportional to the current in the armature windings. The proportionality constant is the torque constant of the motor.

The torque developed at the rotor is equal to the friction torque of the motor plus the resisting torque due to external mechanical loading:

Assuming that a constant voltage is applied to the motor terminals, the motor velocity will be directly proportional to sum of the friction torque and the load torque. The constant of proportionality is the slope of the torque-speed curve and can be calculated by:

An alternative approach to deriving this value is to solve for velocity, n:

Differentiating both sides with respect to M yields:

Using dimensional analysis to check units, the result is:

It is a negative value describing loss of velocity as a function of increased torsional load.

The motor speed under load is simply the no-load speed less the reduction in speed due to the load. The proportionality constant for the relationship between motor speed and motor torque is the slope of the torque vs. speed curve, given by the motor no-load speed divided by the stall torque. In this example, the speed reduction caused by the 0.2 oz -in torque load is:

The motor speed under load must then be:

The mechanical power input to the motor is the product of the applied voltage and the total motor current in Amps. In this application:

The heat resulting from I2R losses in the coil is dissipated by conduction through motor components and airflow in the air gap. The ease with which this heat can be dissipated is a function of the motor type and construction. Motor manufacturers typically provide an indication of the motor’s ability to dissipate heat by providing thermal resistance values. Thermal resistance is a measure of the resistance to the passage of heat through a given thermal path.

A large cross section aluminum plate would have a very low thermal resistance, for example, while the values for air or a vacuum would be considerably higher. In the case of DC motors, there is a thermal path from the motor windings to the motor case and a second between the motor case and the motor environment (ambient air, etc.).

It is important to be certain that the final temperature of the windings does not exceed their rated value. In the example given above, the maximum permissible winding temperature is 100°C. Since the calculated winding temperature is only 50°C, thermal damage to the motor windings will not be a problem in this application. One could use similar calculations to answer a different kind of question.

For example, an application may require that a motor run at its maximum torque without being damaged by heating. To continue with the example given above, suppose it is desired to run motor DC at the maximum possible torque with an ambient air temperature of 22°C. The designer wants to know how much torque the motor can safely provide without overheating.

Setting I2R equal to the maximum power dissipation and solving for I yields the maximum continuous current allowable in the motor windings:

Therefore, there is usually some heat sinking which results from simply mounting the motor into a framework or chassis. Some manufacturers of larger DC motors specify thermal resistance with the motor mounted into a metal plate of known dimensions and material.

The preceding discussion does not take into account the change in resistance of the copper windings as a result of heating. While this change in resistance is important for larger machines, it is usually not significant for small motors and is often ignored for the sake of calculation.